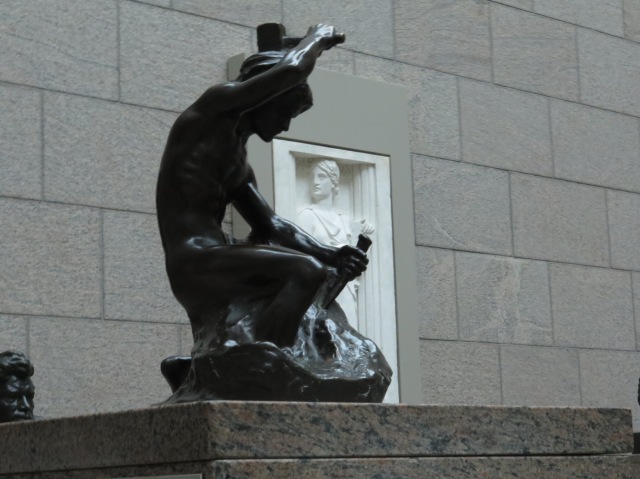 Waiting standing thinking — will the weather change ? That horizon, like a stone bench holds a heavy heaven cloud, but just here the courtyard light streams through the skylight and all seems bright. Bright for now.  But what of yesterday too when ringing around with sound of hammer on steel I wandered slowly gazing. A bass clarinet breathing sounds through the parapet. A low sounding solo of calm resigned loneliness talking to the dying day. A furrow grazed his brow as I stood there looking at the far sky.But here I stand today all quiet and mourning the day like it had died already and just waiting,, waiting for the standing thinking time to finish.

“Do you think I would really leave ?  After getting to know you a bit ?” he said, not turning his head, but staring into the distance.

“I’m standing here thinking you’d already gone.  But I suppose things didn’t work out.  With the project..  So I thought.. I thought you would be.. leaving for the next place.”  she said.

“I would leave and I know that having left, I’d probably forget the place quickly.  Depending on what came next you know. But then I’ve got used to this courtyard, that crazy musician inside and you too. Standing there so thoughtful.  It’d be hard to leave again.” he said

“But that rock has to be split, you know – it cannot stay this way.  It was like a river rock to wrestle with, and now it’ll be split into two forever.  The pieces wont join back again.” she said.

“But there’ll be a left hand and right  hand part.  They could fit together and the memory of their fit might last.  Don’t you think ?”

“No, once split, those rocks will go their own way, the edges rounding off on other paths, and then they would not fit together again, even if by some faint chance they met again.” she said.

but for the hammer on the rock I cry,

and waiting standing thinking there

I saw him leaving